FrogPets is reader-supported. We may earn a commission if you buy through the links on our site.

Home → Learn → How To Tell If A Frog Is Poisonous

There are over 4,700 species of frogs inhabiting every continent in the world except Antarctica. They come in different sizes and colors. Some are arboreal, some terrestrial, and some aquatic. But are frogs poisonous? And if so, how dangerous are they?

It may surprise you to learn that frogs (and toads) have toxins on their skin. These toxins are a frog’s defense mechanism against predators. They range from mild to dangerous.

Because toxins are a substance that can be absorbed or ingested, it’s considered poison. Scientists refer to this type as “bio-toxins” or “natural toxins” because it is produced by a living creature.

This post is meant to show you how to identify the poisonous frogs and teach you a little about bio-toxins.

Don’t worry – most frogs are harmless to humans. Regardless, there are a few species that actually are dangerous. I will show you how to identify them based on their appearance and location in the world. Aside from toxins, amphibians are known to carry salmonella – but more on this later.

The “dangerous” frogs are the ones carrying toxins that are potentially life-threatening when touched or ingested. They’re the ones you should avoid. Luckily, there aren’t too many of them and they’re easy to identify.

They come from the Dendrobatidae family; commonly known as poison dart frogs. These brightly colored frogs inhabit the rainforests of Central and South America. While pretty to look at, they contain a powerful alkaloid toxin known as Batrachotoxin (BTX), which works by causing paralysis when entering the bloodstream.

Batrachotoxin is likely the most famous amphibian toxin due to the popularity of dart frogs (Dendrobatidae)[1].

The most defining feature of poison dart frogs is their color. There are over 100 species of poison-dart frogs; all of which have varying colors, patterns, and sizes. Below are two pictures for examples.

Notice the different colors. The one on the left is black, having blue and green speckles on its legs and a yellow-green stripe on the back. The one on the right is mostly yellow. Can you spot the similarities? The general shape and build are the same. Both have a pointed nose and black eyes.

Poison dart frogs have different patterns and colors but they all have the same general shape with few exceptions.

Only a handful of species within the Dendrobates family are considered deadly to humans. In fact, at the time of writing this, I was unable to find a single published report of someone dying as the result of a frog.

A term for this warning coloration is Aposematic. Example: “the dart frog has aposematic coloration.”

Not all colorful frogs are as deadly. Some species mimic poisonous frogs in appearance, all the while having a very weak toxin in comparison. Others simply have bright colors due to years and years of adapting to a certain region.

Utilize the illustration and photos above to see what poison-dart frogs look like. This, along with what you learned, will help you to tell if a frog is poisonous or not. More accurately, it will help you identify the dangerous ones.

Knowing where poison-dart frogs live is useful because it helps you determine whether or not you should be concerned. They’re adapted to a warm, high-humidity, rainforest environment and can’t survive in much of the US, Canada, or the UK.

Poison Dart Frogs are endemic to Central and South America. They thrive in the rainforests where humidity is high.

From parts of Bolivia and Brazil in South America, up to Nicaragua in Central America. In addition to this, Green and Black Dart Frogs were introduced into Hawaii.

Up until now, we’ve covered the most dangerous frogs, what they look like, and where they’re located. However, frogs aren’t the only poisonous member of the Anura order. Toads have toxins, too.

There are some differences between true frogs and true toads, but that’s a topic for another post. Because people often use the words “frog” and “toad” interchangeably, I’ve decided to include them in this article.

Yes, toads are poisonous too. They secret a toxin from parotoid glands which are located just behind their eyes. It’s called Bufotoxin.

By the way, “true toads” are found in the Bufonidae family. Hence the name “bufotoxin”.

Bufotoxin is relatively weak in comparison to that of dart frogs (Batrachotoxin). Regardless, it’s worth mentioning here because toads are abundant and can be dangerous to small animals like cats and dogs.

Toads are found all over the United States, Canada, United Kingdom, and other parts of the world. And much like frogs, the potency of their toxins differs from one species to the next.

Toads carry bufotoxin in the glands behind their eyes (see the picture below). It has a milk-like appearance.

Touching it can result in irritation of the skin. Rubbing your eyes after getting the toxin on your hand is undoubtedly worse. Swallowing it would be unlikely because, well, people generally don’t go around swallowing live toads. Some reactions include a strong irritation, vomiting, allergic reaction, and general discomfort.

You’ll be happy to know that toads cannot excrete the substance at will. It has to be squeezed out. This is why animals are more at risk than humans. A playful cat or dog might fall victim to a toad if they bite and squeeze out the toxin.

Two particular species to watch for are Cane Toads and American Toads. Cane toads are an invasive species to Florida. They’re large compared to most amphibians. American Toads (Anaxyrus americanus) include a few sub-species and they inhabit Central and Eastern United States.

Here are some tips when dealing with toads. Be careful not to squeeze their parotoid glands. Remember, this is where the bufotoxin is stored. It has a milk-like appearance. If you get some on your hands, thoroughly wash your hands with soap and water. Keep an eye on your pets. Cats and dogs find toads interesting and bufotoxin is more harmful to small pets.

Salmonella: It’s not just poison you have to worry about.

In general, it’s best not to handle frogs. Handling amphibians is frowned upon because it is stressful for the frog. Not only that, their skin is semi-permeable, so any chemicals on your hands will likely be absorbed into the frog. Those chemicals can be harmful or deadly to the frog.

Another reason, and the focus of this section, is that frogs and toads can carry the bacteria called Salmonella [2]. It’s thought to be spread through their droppings. Either by direct or indirect contact, you might be at risk!

This is especially important for young children, who are notorious for catching wild frogs, toads, and reptiles. I did it when I was young. My two kids love catching frogs.

Children under the age of 5 are more likely to develop severe symptoms caused by salmonella, according to the NY State Department of Health[3]. No one wants salmonella, so do yourself a favor and be careful. If you come into contact with any reptile or amphibian, be sure to thoroughly wash your hands with soap and water!

I hope this page has been helpful in identifying the harmful, poisonous frogs! The following section will answer some common questions.

This section aims to provide short, precise answers to popular FAQs regarding the toxins in amphibians. Please refer to the main portion of the guide for more information on identifying the potentially harmful frogs.

Are all frogs poisonous?

It’s thought that all frogs produce toxins, whether mild or strong. Because “poison” is defined as a harmful substance that is absorbed (by touch) or ingested (swallowed), toxins are poison. Technically speaking, all frogs are poisonous. Most, however, are not harmful to humans and some are barely harmful to animals.

We learned at the beginning of this post that some scientists call these toxins “bio-toxin” or “natural toxins” because they’re produced by living creatures (frogs).

What are the most common symptoms of poisonous frog toxins?

The most common symptoms of poisonous frog toxins can include a strong irritation, vomiting, allergic reaction, and general discomfort.

What should I do if I come into contact with a frog?

If you come into contact with a frog, be sure to thoroughly wash your hands with soap and water.

All frogs produce toxins and toxins are considered a type of poison. So technically speaking, tree frogs are poisonous. However, most of them are not dangerous to humans.

Tree frogs are arboreal meaning they live in trees. Their pads (like fingers or hands) are specially developed for climbing. They’re the frogs you can find seemingly stuck to the underside of leaves, on your windows and other vertical-oriented surfaces.

Two of the most common types of tree frogs in the United States are Gray Tree Frogs and American Green Tree Frogs. Both produce a mild toxin that is barely noticeable, even to small animal predators.

Some species of frogs are semi-arboreal. This means they spend part of their lives in trees and the other part on the ground (terrestrial). A few poison-dart frogs fall into this category. For example, it’s not uncommon to see them on plants, namely bromeliads, a few feet off the jungle floor. While they’re not considered tree frogs, they can be dangerous. They’re mostly found in Central and South America. 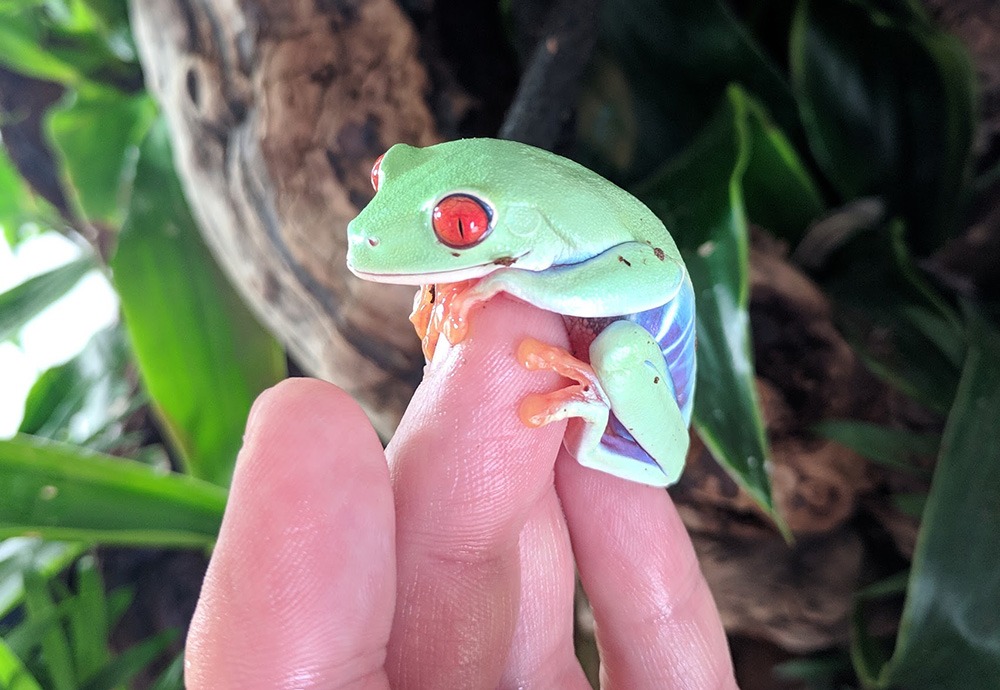 What are the risks of handling poisonous frogs?

While most frogs are virtually harmless, there are still risks. Those risks include exposure to harmful bacteria, such as salmonella, and the toxins on their skin. Most are harmless but some are not.

Are young children more at risk for exposure to these harmful bacteria?

What is the deadliest frog?

The Golden Poison Frog is considered the world’s most toxic amphibian. However, recent findings suggest the title of the deadliest frog goes to a venomous frog (yes, I meant to type venomous) known as Bruno’s casque-headed frog.

TLDR; How To Identify Poisonous Frogs

If you’re looking to learn how to identify poisonous frogs, this guide is a great place to start. We’ve outlined the most common ways of identifying dangerous frogs as well as what to do if you come into contact with one.

In summary, there are only a few dangerous frog species in terms of toxicity. They’re known as poison dart frogs and they are mostly located in Central and South America. Also, cane toads and other large toads can be deadly to small pets like cats and dogs.

Frogs can be harmful not just because of their poison, but also through the spread of bacteria like salmonella. Be sure to wash your hands thoroughly if you come into contact with any amphibian!

Hey! I am the founder of FrogPets.com! I'm an amphibian enthusiast with a passion for helping like-minded people take better care of their pets. Click here to learn more!

Thermostats →
The best thermostats for regulating your heating device(s).