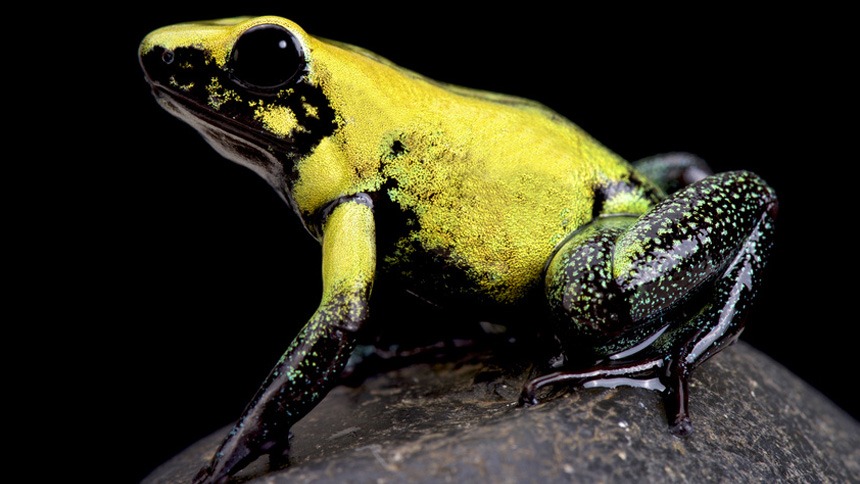 With over 170 species of poison dart frogs, also known as Dendrobatoidae, it’s fascinating to question which of these is the deadliest. The Dendrobatoidae family has 7 Genus; only one of which has been documented as being used to make poisonous darts or arrows. That Genus is known as Phyllobates and it contains 6 species of frogs, all of which are native to South America.

In this article, we will uncover some fascinating facts about Phyllobates, the most poisonous species of frogs on earth. But what makes them so deadly? How was the poison extracted and which of the six species is the most potent? I’ll answer those questions and more in the paragraphs below.

Why Poison Dart Frogs are Deadly

Before I reveal the deadliest frog, it’s important to understand why some frogs are poisonous in the first place. It essentially comes down to their genetic make-up and the food they eat. Studies suggest poison dart frogs do not synthesize their own poisons but, instead, metabolize harmful toxins from alkaloid-containing food sources. Arthropod’s like centipedes, mites, and ants are what make these frogs poisonous. This is known as the diet-toxicity hypothesis.

A study by Ralph Saporito revealed not just mature frogs are poisonous, their tadpoles are too. Mothers place alkaloids in unfertilized eggs which are fed to the tadpoles. The toxins are absorbed, resulting in deadly poison-dart tadpoles.

With this information in mind, keeping poison-dart frogs in captivity is common practice among frog enthusiasts worldwide. Captive-bred poison arrow frogs are considered harmless because they don’t have access to food containing alkaloids.

It’s also important to understand the difference between poison and venom. These terms are used interchangeably but they’re not the same thing. Venom is a harmful toxin which is injected into the body. Snakes are best described as venomous because they inject toxins with their fangs. Poison is ingested or absorbed through the skin. Hence the reason poison-dart frogs are considered poisonous. Predators misfortunate enough to consume these deadly frogs will fall victim to a number of horrific side-effects. Even touching or picking up a wild Phyllobate can be fatal.

The reason behind their name is largely due to the Emberá tribe of South America. Natives collected poisons from the Phyllobates species to coat their darts and arrows. The arrows were then used for hunting.

The process in which the poisons are obtained is quite unsettling, to say the least. Once caught, the Emberá would carefully store the frogs in hollow cane poles. When they needed the poison, a sharp stick was pierced through the frog’s throat and out the hind end. The natives did this to agitate the poison-dart frogs, causing them to sweat out the poisons from their backs. The poison is best described as a frothy, white substance.

Once the natives obtained the deadly poison, they simply dipped their darts in it. The now poisonous darts (or arrows) would remain lethal for up to a year and the reason the darts are so deadly is that Phyllobates produce an alkaloid toxin called Batrachotoxin.

Batrachotoxin is a remarkably potent neurotoxic & cardiotoxic alkaloid found a few birds, the melyrid beetle and, of course, the poison-dart frogs of the Phyllobates Genus. Batrachotoxin causes paralysis and death by blocking the transmission of nerve signals to muscles. Currently, there is no effective antidote.

While the Phyllobates Genus may contain some of the world’s most poisonous frogs, it’s not the only Genus that has them. The Dendrobatidae family contains over 170 species, with the majority of them containing some form of Alkaloid toxin. Some honorable mentioned for species not listed below are the Phantasmal, Zimmermann’s, and Strawberry poison dart frogs. 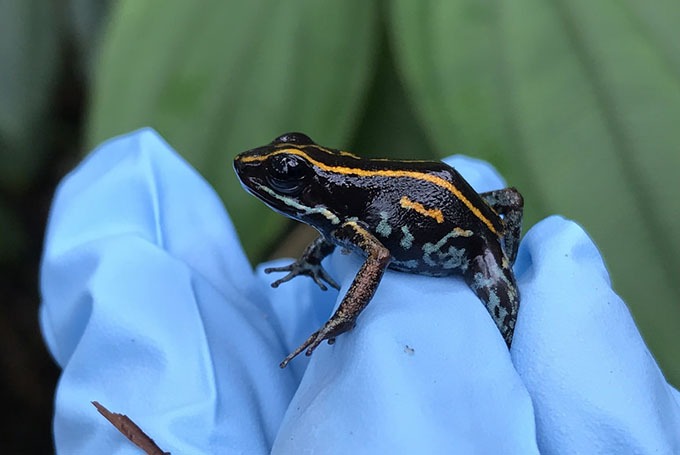 The scientific name for this species is given on a temporary basis due to recent discoveries claiming this is an entirely different species from the Phyllobates aurotaenia. It was formerly thought to be a morph of the aurotaenia species and although they share a similar appearance, the genetic makeup of sp. aff. aurotaenia is closer to that of the golden poison frog. 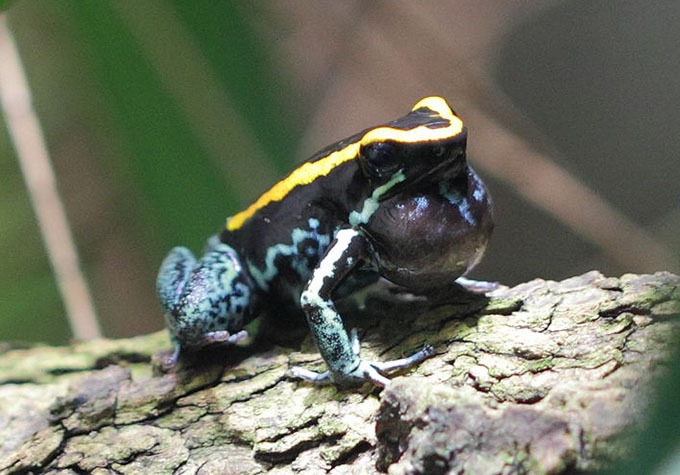 The Golfodulcean poison frog is the 4th most dangerous species of the Phyllobates Genus. This frog grows a bit bigger than most poison-dart frogs, reaching lengths up to 1.4 inches. Because of its size, the vittatus contains a fair amount of poison. Handling this species in the wild may result in seizures, paralysis, severe pain, and even death. 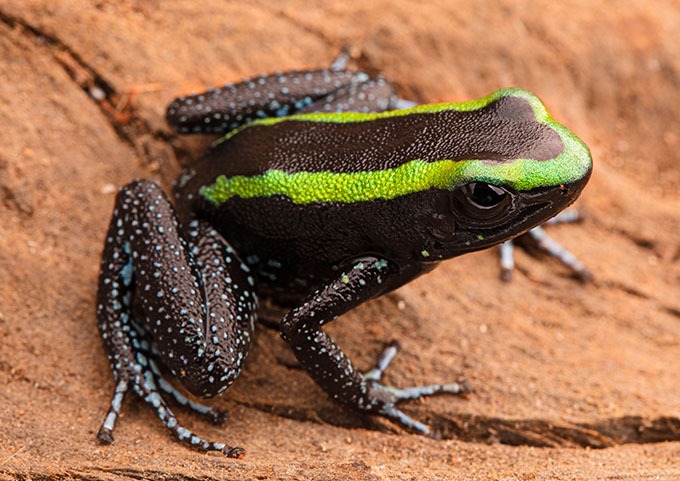 The kokoe poison frog is the 3rd deadliest frog in the Phyllobates Genus. Batrachotoxin is secreted through its skin with another potent toxin called Allopumiliotoxin 267A. This species is capable of killing nearly any predator careless enough to eat it.

Much like the other poison dart frogs with batrachotoxin, the poison quickly destroys the nervous system by forcing sodium ion channels to remain open resulting in loss of muscle control, convulsions, paralysis and sometimes death. 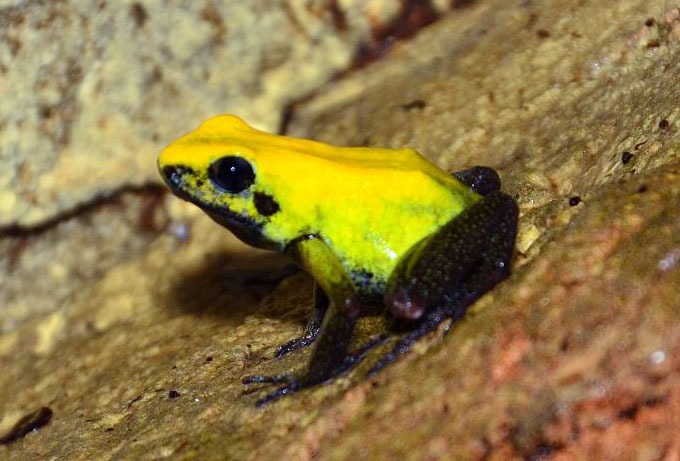 The black-legged poison frog or “Phyllobates bicolor” is the 2nd most poisonous frog on earth. Roughly 150 mcg (micrograms) is enough to one adult human. Their bright coloration is similar to that of the golden poison frog but with the addition of black legs, hence their common name.

Once their batrachotoxin makes its way into your system, it begins attacking the nervous system. Severe pain immediately covers the body followed by seizures in less than a minute. Eventually, full paralysis sets in followed by death in as little as 5 minutes. 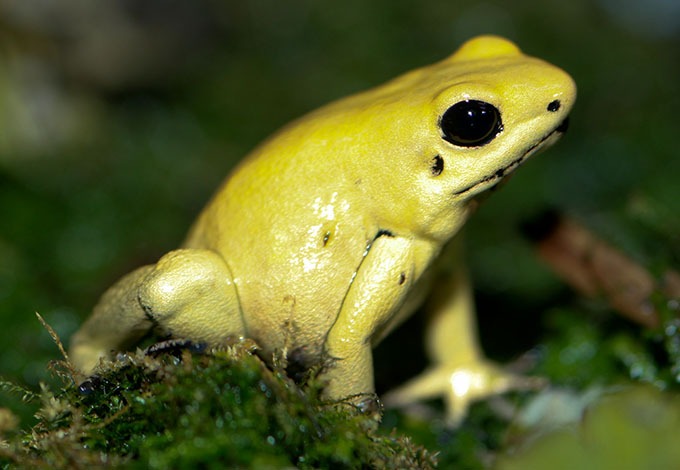 The final frog on our list is the Golden poison frog, the deadliest frog in the world. Even its scientific name aims to provoke fear into the hearts of those curious enough to learn its name. Phyllobates translates to “leaf-climber” while terribilis roughly translates as “terrible” or “dreadful”.

And rightly so, this dreadful leaf-climber contains poison so potent, its rumored to kill animals that come into contact with surfaces the golden poison frog walks across. Roughly one gram is enough to kill 15,000 humans. Thankfully, these little frogs only carry approximately one milligram, or enough poison to kill one to two fully-grown elephants. That translates into 10 – 20 adult humans.