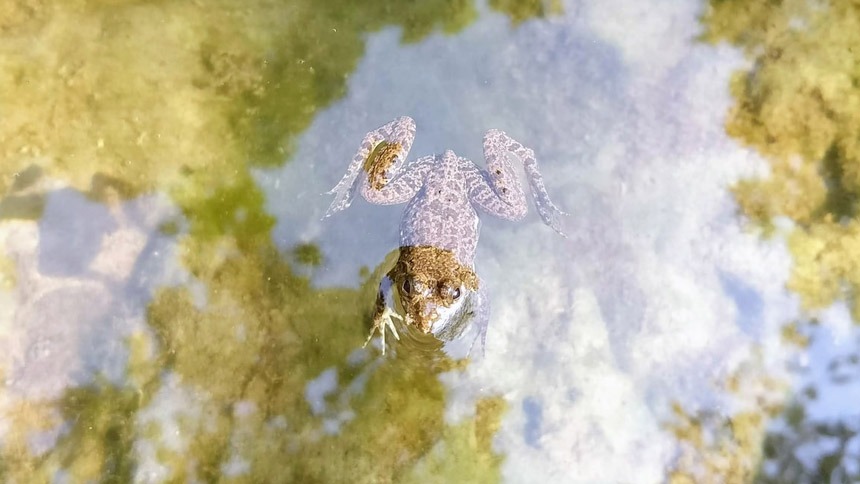 Can frogs breathe underwater? Answering this question is slightly complicated because there is, surprisingly, more than one way to do so! Many mammals, including humans, breathe using lungs.

In their juvenile stage as tadpoles, frogs have gills and live completely underwater, like a fish. As they become frogs, they develop lungs and can breathe air, just like us. It may sound surprising, but frogs have the unique ability to continue to be able to breathe both underwater, and above it.

Read below to find out more about how both tadpoles and frogs can breathe in the strange, and wonderful, ways they do.

Tadpoles are what is known as the larval stage of a frog’s development. This means that their juvenile form is so different from their adult stage that they need a special process to get there. This is called metamorphosis.

Other examples of creatures that undergo this metamorphosis are butterflies or other insects like cicadas. Some things that differentiate tadpoles from frogs are their gills, tails, and a special sensory organ known as the LLS.

The Sri Lanka Rock frog is a vulnerable species of frog. It is one of the few known species of frogs whose tadpoles are terrestrial, and don’t live entirely in the water during their development.

Many species of frogs lay their eggs nearby to bodies of water. The Sri Lanka rock frog lays its eggs near mountain streams, so its tadpoles can hunt the tiny creatures that live in the rocky riverbanks.

A decree of “vulnerable” by the IUCN means that the species is “likely” at risk of becoming an endangered species. (Unless it is able to reproduce more and the threats to its habitat decrease.) The Sri Lanka rock frog is now considered vulnerable.

This might sound like not too hard of a problem to fix, but often these threats are complicated and hard to remove for a reason. Factors that can increase the likelihood of a species becoming more vulnerable include habitat loss, poaching, and invasive species.

Unfortunately, the habitat of the Sri Lanka Rock frog is affected by pollution, such as runoff from agricultural pesticides or other chemicals, and drought.

Tadpole’s development into the frog stage is fascinating. During metamorphosis, tadpoles’ lungs will develop along with their first legs. Their first limb forms into two new back legs, followed by two front legs, and their tail is absorbed into their bodies. Once their lungs are fully functioning, they will visit the surface of the water to gulp air.

Different species might develop at different rates, based on different factors.

For Fire-Bellied Toads, it takes about 3 weeks for the first hind legs to appear. Another week for the front legs to develop, and then by 5 weeks, they will be ready to leave the water.

As Frogs (Both ways.)

Frogs have two different ways they can breathe.

Since frogs are small, and their cold-blooded bodies don’t need a lot of energy to stay alive, they don’t require a lot of oxygen. Much like during hibernation, the lower their activity and metabolic rate, the longer they can survive.

These traits allow some frogs to survive in environments with less oxygen than other creatures.

The endangered Bornean Flat-Headed frog is the only currently known species of frog that breathes entirely via its skin. It actually doesn’t have any lungs at all! Salamanders also share this trait.

The Titicaca water frog, which is critically endangered, has very wrinkled skin. This means its skin has a bigger surface area to use for cutaneous respiration.

It can live in water with even less oxygen than most frogs because of this. The famous Jacques Cousteau recorded these frogs living at a whopping depth of 400ft.

Yes, even with their ability to breathe through their skin, if their environment runs out of oxygen entirely, frogs can drown. Many things can cause the level of oxygen in the water to go down. For this reason, it’s important to educate yourself on aspects of how to properly maintain your frog’s habitat.

You should always make sure there are multiple ways for your frog to get out of any water source in its tank. Even a water dish can be dangerous for a small creature if they have no way to get out.

Learning how to correctly and safely change tank water for an aquarium, and manage things like humidity and temperature, make a big difference to your frog’s health. There are many care sheets available to help research proper care, no matter what type of frog you have.

A few degrees’ change in their immediate environment is no problem for warm-blooded creatures most of the time. It can be disastrous for small frogs. This is why it’s important to ensure there’s a cool non-heated area for pets to go to. Anytime you utilize a heater in their environment, consider what happens if it gets too hot.

Things you might not expect can be a big danger to amphibious pets. During metamorphosis, especially, frogs can produce a lot of waste and if it is not cleaned regularly, this can make them very sick. Some species have certain terrains or habitat size requirements to avoid stress.

A good pet parent, armed with the right knowledge, shouldn’t need to worry too much about their frogs’ ability to breathe underwater. In the right habitat that’s set up well, a frog shouldn’t have problems surviving.