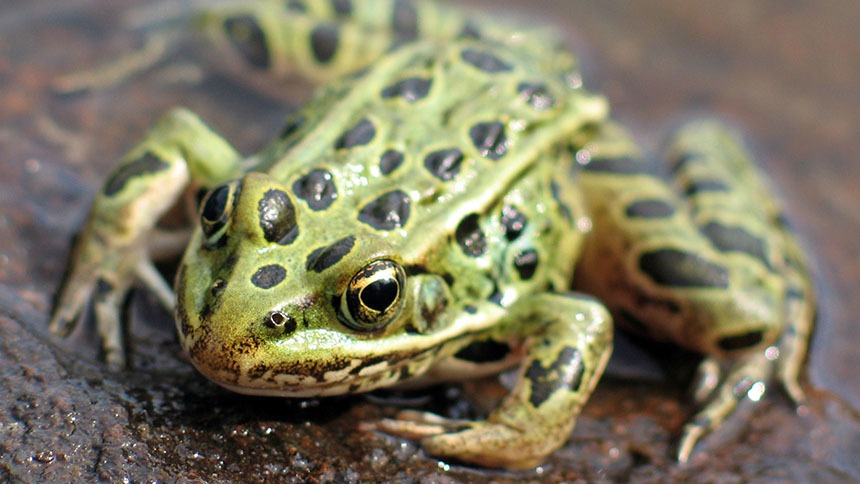 Leopard frogs are small, cute frogs, that are a great pet for beginners. They’re not poisonous like a poison-dart frog. Poison dart frogs are considered one of the most dangerous animals on the planet; with some species having poison deadly enough to kill an adult human. In contrast, leopard frogs are certainly not deadly (not to humans).

Leopard frogs, like most frogs, produce a mild toxin as a defense mechanism against predators, but it has little to no noticeable effect on humans. The only real threat leopard frogs have is that they (and other amphibians and reptiles) can carry the salmonella bacteria, which can be harmful to humans.

As a safety precaution, always wash your hands after handling amphibians. Before washing your hands, be sure not to rub your eyes or mouth. Other than that, leopard frogs are basically harmless to humans.

The leopard spots are the frog’s first line of defense against predators, because they help camouflage them in the wild. Also, these frogs are relatively timid. They’ll hide when threatened. In water, you might see them hanging out just under the surface. They’re ambush predators, meaning they lie quietly in wait for their prey to stroll by. They’ll eat any insect that is smaller than they are, and they’ve been known to eat smaller leopard frogs as well.

Leopard frogs are small, skinny frogs, with a powerful leap. In the wild, they can jump as high as three feet and slightly less in captivity (due to the restriction in room, of course). They tend to be about the size of a teacup (3 – 5” in length). The most abundant species of leopard frog in the United States is the Northern Leopard Frog.

Recently, in 2012, a new species of leopard frog was discovered just outside Yankee Stadium in New York because of its distinctive croaking noise (which is totally different from any other leopard frog species). This new species has yet been named, but is referred to as “Rana sp. nov,” which means “new frog species.”

Leopard frogs are semi-aquatic, and they can be found throughout most of North America and Mexico, and some leopard frog species can also be found in Europe. While they can live in a variety of terrains and climates, they need to be near some permanent water source, like ponds, marshes, streams, lakes, and even irrigation systems. If there is water nearby, they can be found more inland in tall grasslands, which has earned them the nickname “meadow frogs.”

Most Frogs Produce a Mild Toxin

Most frogs produce a mild toxin as a secondary defense mechanism against predators. The glands that secrete these toxins are all over the body, mostly on their back. They secrete this foul-tasting toxin (and sometimes mucus) when threatened, which makes them taste bad to predators. It also makes the frog a little bit slippery and slimy, making it hard for a predator to hold the frog in their mouth. Often, a predator who has come in contact with a frog remembers the experience and avoids them in the future.

These frogs typically aren’t dangerous to humans. While they do release a mild toxin when threatened, it just isn’t potent enough for phase humans. Granted, certain species produce toxins enough to cause mild discomfort or vomiting but only if you happen to ingest it by accident. This can happen by handling a frog (or toad) with excreted toxins, then rubbing your eyes or mouth without first washing your hands.

Frogs that tend to be poisonous to humans (like the poison-dart frog) usually have brightly colored (red, orange, yellow, blue) bodies, advertising their danger. If you see a brightly colored frog, those colors mean “stay away, I’m toxic!” A select few have their bright colors on their bellies, but in general, if you see an exotically colored frog, it’s a good idea to stay away; especially if you’re in a tropical region of the world like South America.

Almost all amphibians and reptiles carry the salmonella bacteria in their intestines and excrete it in their waste. A frog with salmonella usually won’t look sick in any way. It’s relatively easy for humans to contract salmonella from them, too. Humans can be exposed through either direct or indirect contact with the frog, it’s droppings, or anything the frog touches.

Contact with the salmonella bacteria causes salmonellosis in humans, which is characterized by diarrhea. Since many people have amphibians as pets, it’s important to practice good hygiene after handling your frog or touching anything in their enclosure or tank.

It’s also not a good idea to let children younger than five hold any wild amphibians. Young children tend to use their mouths to inspect things and doing this with frogs can make kids severely ill. I don’t want to scare away any future herpetologists or anything, just be sure to wash your hands

Leopard frogs are an abundant and popular species in the United States. They make excellent pets because of their size, temperament, and lack of toxicity. The only danger they pose is as a result of being carriers of the salmonella bacteria, which can be transmitted to humans if proper hygiene isn’t followed.

Be mindful of the animal, too! Being handled by a human can be traumatizing for a small frog; it’s stressful for them. If you can’t help yourself, please check out this post about handling amphibians and be sure to wash your hands before and after!