Home → Learn → This is Why Frogs Croak After it Rains 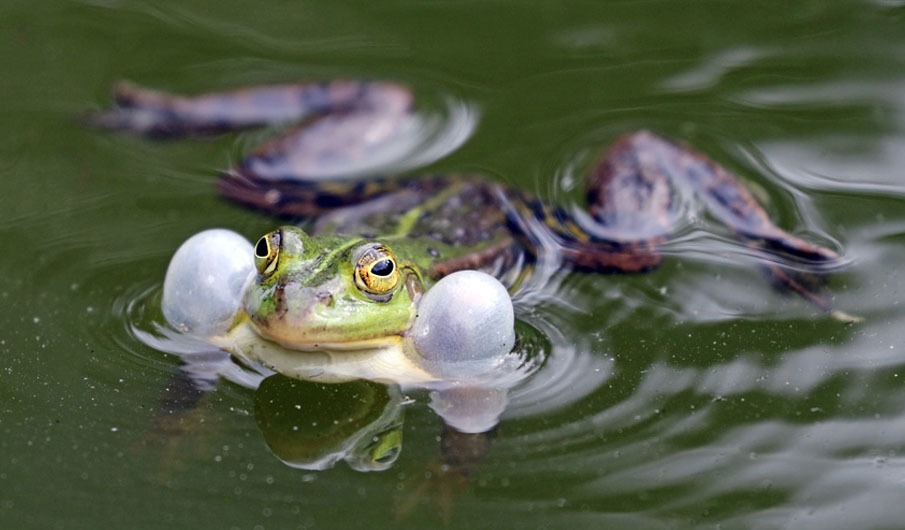 This is Why Frogs Croak After it Rains

On this page, I’m going to do my best to answer the question “Why do frogs croak after it rains?”. There are several reasons you can hear frogs and toads croaking after a heavy rainfall and it usually has something to do with mating.

The short answer is this: Male frogs croak after it rains because they’re trying to attract a mate. Rain creates the optimal conditions for the females to lay eggs in fresh pools of water. Not only that but frogs like moist, humid weather. After it rains, the humidity is high and the clouds make things dark, cool, and otherwise enjoyable for amphibians.

Mating isn’t the only reason, though. If you care to stick around, I’ll go into greater detail on more of the reasons frogs and toads croak after it rains. By the way, frogs croak during the rain and sometimes before it rains too.

More than likely, you’ll hear frogs croaking during and after a springtime rain because this is their mating season. What you’re actually hearing are male frogs; they’re doing their best to sound cool in hopes of attracting a female frog to mate with. Frogs have a strange breeding cycle, one that is triggered by raising temperatures, more water, and more food.

It’s fairly interesting, actually. You see, some frog keepers replicate these conditions in order to get their pet frogs to breed in captivity. Sometimes it’s the only way to get them to reproduce. This is how it works. Over the winter months, frogs are exposed to cooler temperatures, less food, or usually less rain. What triggers the breeding season is the rise in temperature, increased rainfall, and the abundance of food.

As spring time rolls around, the temperature rises and things become more active. Rain is “the icing on the cake”, so to speak; it creates new bodies of water by forming puddles and filling dried-up creeks and small ponds. These new bodies of water serve as a great place for female frogs to lay their eggs. To wrap this section up, frogs croak after it rains because the time is just right for them to mate and lay eggs in fresh bodies of water. You’re most likely to hear the frogs croaking after it rains during the spring and summer months.

So, we already know the main reason frogs croak after it rains but another benefit of a spring rain is the abundance of food. Heavy rainfall can knock flying bugs out of the air and it causes earthworms to come to the surface. Exposed earthworms are easy targets for hungry toads.

Remember, an increased amount of food is another trigger for mating. While a suitable temperature has more to do with the abundance of bugs, rain can help bring some of them (like earthworms) out of hiding.

Most frogs are found in or around water. Whether it’s a river, stream, pond, or lake, they want to be near water. The same goes for toads. True toads, those in the Bufonidae family, can last longer without water but they definitely still need it. You get the point, frogs need water.

A rain creates small puddles of water and increases the moisture content in the air. Because of this, frogs are more likely to venture out and sing until their heart’s content (or until they find a mate).

Some species, like poison-dart frogs, require a relative humidity of 80% or higher. Other frogs survive in climates with low levels of humidity. Regardless of species, they all enjoy occasional spikes of humidity brought on by a warm spring rain.

Frogs Croak… Before A Storm?

Have you ever heard a story about how animals can predict upcoming storms? I have. I thought it was a myth or something made-up at first but these claims might be based on facts. At least when it comes to frogs croaking before a storm. I’m not a scientist and I won’t pretend to know whether this is true or not but some sources claim frogs can detect changes in barometric pressure.

Other sources debate whether or not it has something to do with a change in humidity just before a storm. Whatever the case is, some people believe croaking frogs is a sign that it will rain/storm within the next 24 hours.

To sum things up, frogs croak because they’re trying to attract a mate. The reason this usually happens right after a storm is because the rain has left behind many places for female frogs to lay their eggs.