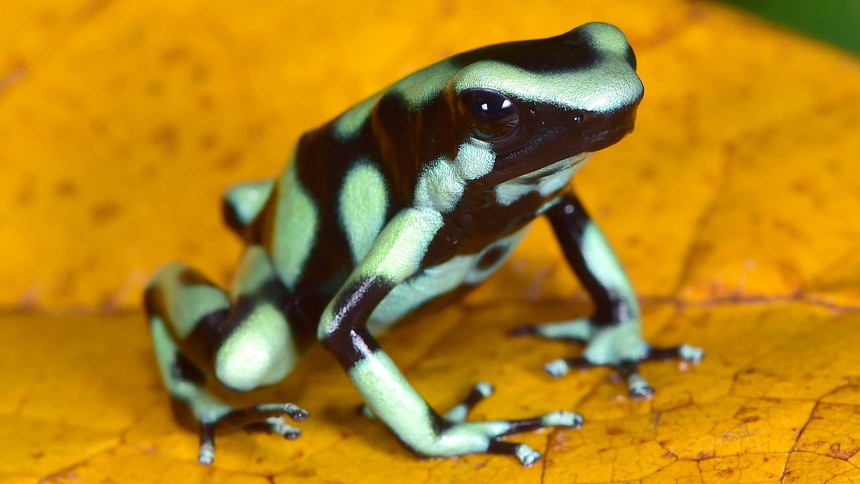 Predators of the Poison Dart Frog

Poison Dart frogs are known around the world for being one of the most deadly animals on earth. The toxin from some Golden Poison-Dart frogs is enough to kill two full-grown, bull elephants (supposedly). While not all them are quite this deadly, most of them produce an alkaloid toxin strong enough to kill any would-be predators.

This potent poison, coupled with their bright colors, is usually enough to deter other animals from trying to eat them. So that begs the question “What are the poison dart frog’s predators?”. That’s the question I’ll do my best to answer on this page.

Before we get into this, I want to give you a quick outline. I’ll go over the typical predators of amphibians in the section below. Most of them don’t bother poison dart frogs and that could be information you already know. Feel free to skip that section if you’re only here to read about the potential snake predator with resistance to their poison. That snake is what I’ll cover in the second section and finally, I’ll close things by discussing other threats to dart frogs.

Frog Predators & Why They Rarely Mess with Poison Dart Frogs

Frogs around the world have many predators. Birds, fish, and reptiles make up the majority of the animals on that list.

Each species of frog has its own means of escaping their predators. Some choose to flee, others hide with incredible camouflage, and some burrow into the ground. Dart frogs have a different trick…

Their bright colors are what keep them safe. Bright colors in the animal kingdom usually means “I’m dangerous, stay away.” This is known as aposematic coloration. I say “usually” because that’s not always the case. Some species have adapted to displaying bright colors despite not being poisonous (or dangerous) at all.

It’s an effective defense, too. Most predators shy away from brightly colored prey in fear of a bad experience.

Birds, reptiles, fish, or any other animal that decides to make a meal of a poison-dart frog either dies or ends up sick with an awful taste in their mouth. For the ones that live through the experience, they know better than to attack another poison dart frog again.

With this in mind, there’s supposedly a certain species of snake that has a resistance to batrachotoxin and the other poisons produced by dart frogs.

Their Only Predator? The Fire-Bellied Snake (Leimadophis epinephelus)

I didn’t know about this snake until recently. As I did more and more research on this topic, I began finding claims about a certain type of snake that has resistance to the toxins produced by poison arrow frogs.

Now, I couldn’t find much information. A short excerpt from the Rainforest Alliance says the scientific name of the snake is Leimadophis . Further research revealed the same bit of information on Wikipedia.

As I continued, I found another source with slightly more information about the subject. The common name of the snake that eats poison-dart frogs is “Fire-Bellied Snake”.

Assuming this is all true, the fire-bellied snake (Leimadophis ) is the only real predator of the poison dart frog.

While dart frogs have few predators, they are still being threatened in other ways. Most of their threats, aside from those fire-bellied snakes, actually comes from us – humans. Some climate change problems but mostly habitat loss are what is threatening them nowadays.

There are over 100 species of poison-dart frogs, most of which are still considered “Least Concern” by the IUCN red list. Still, loss of habitat due to construction poses a threat now and in the near future.

Dart frogs have mostly the same predators as other frogs; snakes, birds, and reptiles. The main difference is their defense mechanism. Most predators know not to mess with other animals with bright colors.

The other big difference is the outcome of an attack. Since dart frogs are indeed poisonous, predators that attack them typically end up injured or worse. Once injured, that predator is less likely to make the same mistake again.

Fire-bellied snakes are the exception. They seem to be the one predator with a resistance to the deadly toxin of a dart-frog. Rumor has it they can eat golden dart frogs (Phyllobates teribilis – the deadliest frog in the world).

Finally, it’s important to realize that natural predators aren’t the only threats. Despite most dart frogs having an endangered status of “Least Concern”, the loss of habitat may change that in the near future.