Home → Learn → Do Frogs Have Hair? 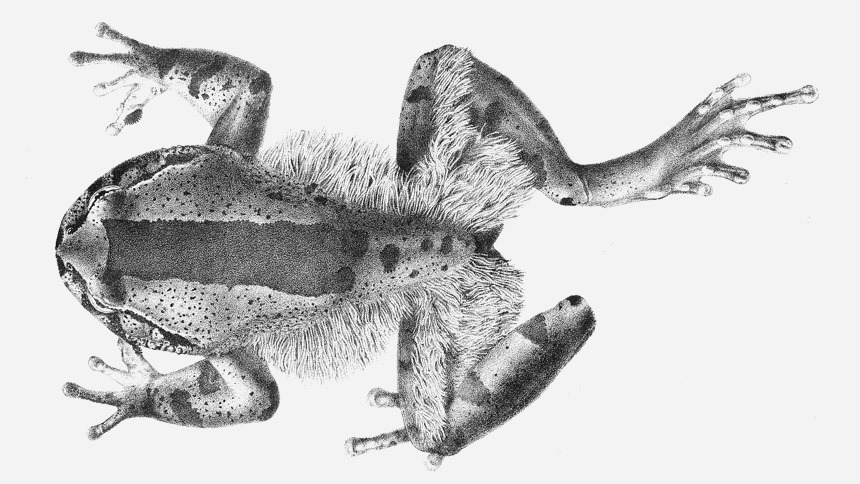 Do Frogs Have Hair?

As mammals, having hair, taking care of hair, and cutting hair is completely normal for us. Many of the animals we surround ourselves with as pets have hair too. Even dolphins and whales have hair, due to their mammalian ancestry.

But do frogs have hair?

Their skin may look similarly slippery to that of a dolphin, but a key difference between them is that frogs lack both hair and hair follicles. Because of how porous a frog’s skin must be to help it breathe, the thick keratin necessary to make hair would only suffocate them. However, there is a frog whose common name is almost an oxymoron: the Hairy Frog.

Trichobatrachus robustus​, commonly known as the Hairy Frog, makes its home in the wet detritus of west-central Africa’s forests and rainforests. They are largely terrestrial but return to freshwater streams and creeks to breed and lay their eggs. For frogs, their environment and behavior are pretty typical. It’s only when you look at a hairy frog closely that things start to get weird.

Hairy frogs, along with the family ​Astylosternus​ of night frogs, are also nicknamed “Wolverine frogs” or “horror frogs” because of their ability to break claws out of their toes to defend themselves. And I say ​break​ literally. Along with a small bone that holds the claw in, the claws actually break the frog’s skin on the way out, much like X-men’s Wolverine. That’s just how these frogs got their nickname, though. The “hairy” part of hairy frog comes from yet another weird feature.

Male hairy frogs are larger than the females, though they share the murky brown and green coloration. The males, however, also have what looks like hair on the sides of their abdomen and their legs. But we already know that frogs can’t grow hair without blocking up their sensitive skin. So how does this particular frog keep breathing?

With its “hairs” of course! The hairlike growths that give these male hairy frogs a nice pair of cowboy pants are actually a skin structure called dermal papillae.

Humans have dermal papillae too, and they help to keep our hair and skin healthy. They feed nutrients to our epidermis and hair follicles, as well as form ridges on our skin that we call fingerprints.

For male hairy frogs, dermal papillae serve a similar purpose, but instead of nutrient distribution, the hairlike ridges aid in nutrient absorption. These slimy extensions of the frog’s skin are a bit thicker than hair, with room for some important anatomy.

Within the dermal papillae are arteries, which help the frog absorb oxygen more effectively, especially since, with so many “hairs,” the surface area for the frog to breathe in through is huge.

The use of dermal papillae to increase male hairy frogs’ breathing capacity is similar to how Axolotls have feather-like gills on their heads to help them breathe. The more spread out they can get their filters, the more air they can catch and breathe.

‘As Fine As Frog’s Hair’

Now, with everything we know about dermal papillae, let’s consider the old adage “As fine as a frog’s hair.” According to Amy Reeves of the Goldendale Sentinel, “​This is an American simile and dates back to the mid-nineteenth century and is used to relate that you are feeling excellent.” She also states that “Frogs do not really have hair and the ironic reference in this saying is intended to accentuate the effect of being extremely fine with how you are feeling.”

Like “blind as a bat” or “stubborn as a mule,” “as fine as frog’s hair” isn’t based on facts. It’s simply a fun thing to say and think about when commenting on how you feel. Though if you did consider the hairy frog’s dermal papillae “hair,” then if someone tells you they’re “as fine as frog’s hair,” they wouldn’t be that fine at all!