Home → Learn → Do Frogs Have Ears? 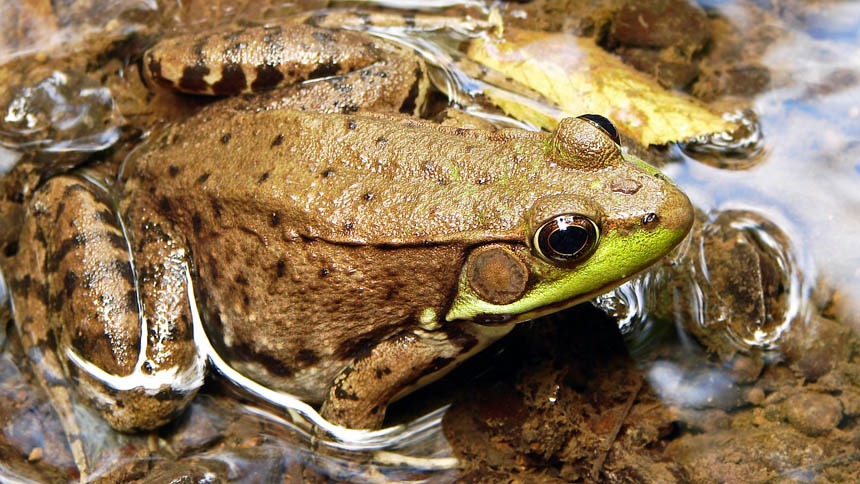 Do Frogs Have Ears?

If a tree falls in the forest, does it really make a sound? And if it does, can frogs hear it? The auditory systems of frogs may be somewhat of a mystery for many people. They’re fairly certain frogs can hear but aren’t sure about the mechanics of it or how.

In reality, frogs have a fairly advanced hearing system. It’s very sensitive, comprised of different pathways (some more prominent than others), and prioritizes specific sounds in order to effectively respond to their environment.

Animals and Their Relationship With Sound

As one of our five senses, sound is already considered important by most people. Animals are no different in this respect, although they may use sound in different ways. For them, sound may be used for any or all of the following:

But how do some animals interact with sound? It’s more obvious to figure out when animals share our hearing structures, such as mammals like cats and dogs. You can clearly see their ears and how they react to sound, like when they twitch or perk up. But what about other species without an external structure, like frogs? Do they have ears?

As stated above, the short answer is yes, although not as we may commonly understand them. The longer answer is what we’ll cover in this article.

The most obvious difference between a frog’s ears and our own is that frogs have no external hearing structure, usually referred to as the outer ear. However, we do share eardrums and inner ears.

Like the majority of animals that interact with sounds (either producing or reacting to them), some sort of auditory structure is needed. For frogs, this is the tympanum. It’s an oval-shaped membrane made up of nonglandular skin (that dry type of skin found on chameleons and turtles) and surrounded by a ring of cartilage.

This is the same circle you see behind a frog’s eye. Tympanums can vary in size and shape depending on the gender and species of the frog. The size and distance from the eyes also depends on the call of the males.

Using this special eardrum, frogs are able to hear both on land and underwater. Tympanums also have the secondary purpose of preventing water, mud, and all other forms of debris from entering a frog’s ears. Basically, it lets the sound in and keeps everything else out.

Parts and Functions of a Frog’s Ear

Tympanums are essentially comprised of two main sections: the inner ear and the middle ear. Within these two sections are all of the basic parts listed below. There are more structures that exist, but these are the basic components.

At a minimum, the middle ear is composed of the tympanic membrane, ascending process, and stapes components. The middle ear serves to transmit and amplify sound waves or vibrations from the air farther into the ear itself, toward the inner ear. The inner ear is filled with fluid and is what registers and reacts to these vibrations. It is composed of the operculum, two windows, sacculus, periodic canal, and papillae. When the inner ear receives sound energy, it is converted into fluid displacements.

For a visual of the different parts of a frog’s ear and how they all connect, reference this figure.

In addition to providing a more in-depth description of the process described above, “Mechanics of the Frog Ear,” also sums up the functions of the inner ear and how it works:

The frog inner ear contains three regions that are sensitive to airborne sound and which are functionally distinct. (1) The responses of nerve fibres innervating the low-frequency, rostral part of the amphibian papilla (AP) are complex. Electrical tuning of hair cells presumably contributes to the frequency selectivity of these responses. (2) The caudal part of the AP covers the mid-frequency portion of the frog’s auditory range. It shares the ability to generate both evoked and spontaneous otoacoustic emissions with the mammalian cochlea and other vertebrate ears. (3) The basilar papilla functions mainly as a single auditory filter.

What this basically means is that the three parts of the ear mentioned above each work together to register and react to sound, but that they’re also capable of interacting with sound waves in their own right. This serves to demonstrate the complexity of frog ears despite their small size.

How the Ear Registers Sound

We’ve listed a lot of technical terms and there’s still more to come, but below we’ve broken down the basic process when a frog hears a sound. So when a tree branch snaps or a fish jumps out of the water, here’s what happens:

In turn, these vibrations travel…

It is at this point that the papillae detect the sound and the frog reacts. The amphibian papillae are sensitive to low and mid-range frequencies (approximately 50 Hz to 1 kHz), while the basillar papillae picks up on higher frequencies (above 1 kHz).

Keep in mind, this is a very simplified version of the path sounds take through a frog’s ear. And actually, there is some mystery about how the sound gets from the canal to the papillae. We know sound does transfer, but there are differing theories as to how.

For those interested in exploring this, Purgue and Narins have identified three potential pathways the sound may take based on existing data and anatomical explorations of frogs’ inner ears.

Consider this scenario: you’re standing in a room and your friend calls out to you. You hear them, of course, and respond. Now consider that same scenario if you’re in the middle of Times Square one minute before the Ball Drop. You’re much less likely to hear your friend now— unless you’ve developed a specific auditory strategy to filter out all those unimportant sounds.

This is exactly what frogs and toads have done. They selectively detect sounds based on how important those sounds are to their survival, creating a sort of sensory filter. Their auditory and peripheral nervous system are both designed to respond to a relatively small set of signals within their immediate range.

This has the advantage of lessening the load on the central nervous system but also has the disadvantage of slowing their reaction to certain environmental events. It also explains why vocal communication is so fundamental to their survival.

To clarify, this selective detection doesn’t mean that frogs and toads don’t hear sounds like leaves crunching. Rather, it means that sounds like mating calls or predator warnings are given preference over the leaves.

“Earlessness” in Frogs and Toads

Sound perception is generally made possible by the tympanic middle ear (TME). But some amphibians are missing either some or all TME components, a condition referred to as “earlessness.” This condition is particularly prevalent among anurans (frogs and toads). Earlessness is especially common in the toad family Bufonidae, as over 200 of the 580 species within this family are affected.

Despite this, many frogs and toads that lack a TME are still able to make high-frequency mating calls and maintain a diverse range of sound production.

In such frogs and toads, it’s believed that alternate pathways for sound transmission are present and serve the same function. These are called extratympanic pathways. These include a lung pathway, a cranial bone pathway, and a mouth cavity pathway. The third pathway has been studied more extensively with Gardiner’s frogs, which are earless and one of the smallest frogs in the world.

This theory is further backed by the fact that amphibian authority systems show “exquisite intensity sensitivity and sharp frequency selectivity,” which suggests the presence of “nonlinear, active amplification processes.”

From an evolutionary standpoint, earlessness is neither steady nor permanent. Over time, different species have lost their TME, regained it, lost it again, and so on and so forth. Sometimes TMEs are regained or lost in their entirety or specific components.

Besides being useful on their own, tympanums also have a special adaptation that prevents them from producing sound that accidentally hurts them: the eardrum is actually connected to the lungs. Almost like a secondary ear, the lungs vibrate in response to sound and are actually suspected to be as sensitive as the tympanum itself.

Because of this connection, frogs are able to make loud sounds without damaging their sensitive eardrums. If you’ve ever heard a bullfrog call or a toad warn its rivals, then you’ve heard this adaptation in action. The lungs essentially do this by equalizing the pressure differences between the outer and inner surfaces of the eardrum.

This isn’t the only time in a frog’s life that the lungs will play a vital role in communication. As a tadpole during the larval stage, the lungs are used for pressure reception to detect sound. During this stage, the lungs essentially serve as eardrums. As sound travels underwater, the lungs will react based on how that sound compresses the air inside them.

When gills begin development and anura enter into their adult stage, the auditory structures connected to the lungs largely disappear as new structure develop in the middle and inner ears.