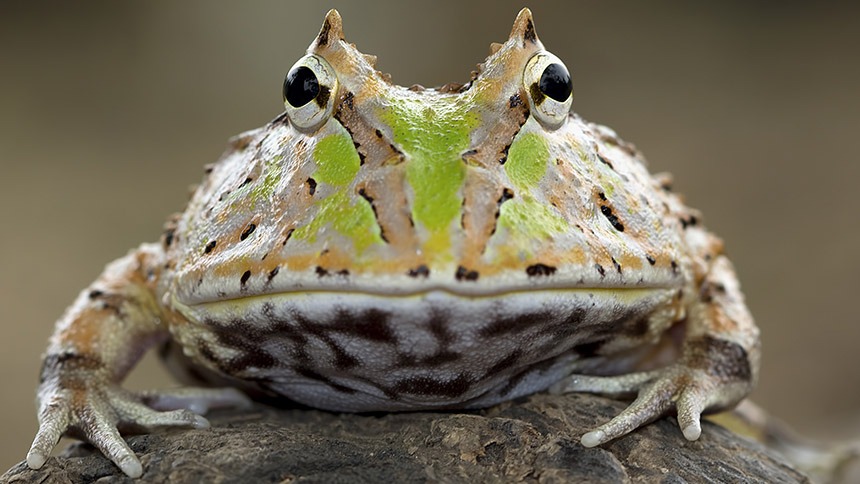 Can Pacman Frogs Live Together?

Pacman Frogs (South American Horned Frog) one of the most popular amphibians in the world. It’s no wonder why either; they have a unique appearance and watching them eat is certainly entertaining. On top of that, setting up a habitat for one is fairly cheap and easy.

Pacman Frogs are solitary creatures. They prefer to be alone, especially in small tanks. To make matters worse, they’re actually cannibalistic. This means that one might eat the other – or die trying (literally).

In short, I don’t recommend letting Pacman Frogs live together. There is a good chance that one (or both) will get injured or worse.

There are some cases where keepers had Pacman Frogs live together peacefully. Those cases are few and far between. For the vast majority of South American Horned Frogs, it’s best to keep them separated. They’re not lonely or bored. They prefer solitude. This is how it is in wild, too.

You might be wondering if there is an exception if you have two Pacman Frogs the same size. If they’re the same size, they can’t eat one another, right? While that may be true, it won’t keep them from fighting. It’s still best to keep them separated.

When Can Pacman Frogs Be Around Each Other?

It’s impossible for Pacman Frogs to never be around each other. They do mate, after all. So, why can’t they be housed together if they mate without problems? Well, let me explain…

South American Horned Frogs live most of their lives in solitude. They’re ambush predators that eat almost anything they can fit in their mouth; including other frogs. The majority of their day is spent burrowed in the ground, waiting for food. They don’t socialize with other Pacman frogs. Really, the only time they’re around each other is during the mating season.

You can find Pacman frogs together when mating season rolls out – Male and Female. This meeting isn’t without risk, though. Remember how I said Pacman Frogs are cannibalistic? Well, it’s true. They’ve been known to eat their own kind. And it does happen during the season.

Especially when there is a major size difference between the male and female. The females are larger than males, to begin with, but should a small, young male approach a large, older female, she might try to eat him. It depends on how hungry she is.

This is a problem in captivity, too. The best method is to ensure both frogs are full (ie, not hungry). Then you can place them together under close supervision. Once finished, the two f need to be separated and placed back in their own enclosures.

The only scenario in which two Pacman Frogs might live together peacefully is if they’ve grown up with each other. Perhaps if they were siblings and spent the whole lives together in captivity. Even then, I wouldn’t encourage this

I’ve personally never attempted to keep Pacman frogs together in the same tank. The only reason I’m mentioning this is that I’ve done research on the subject and I want to be as helpful as possible.

There are tales from across internet forums about keepers raising Pacman Frogs together, in the same enclosure. According to them, they were successful and “it is possible”. Unfortunately, it’s hard to tell if this is true. Either way, play it safe and keep your horned frogs separated.

I know its tempting to keep two Pacman Frogs in the same terrarium. Especially if you have one tank set up already and you want another frog but don’t want to buy another tank! I get it. But resist the temptation and keep your them in separate enclosures.

Placing two of them together in the same tank can result in injury or death. Don’t put a juvenile frog in the same tank with an adult; it could very well get eaten. And even if they’re the same size, the two will most likely fight.

Finally, as I mentioned in the paragraphs above, they can be in the same enclosure for breeding but it’s best to feed them first. It’s also a good idea to monitor the frogs to ensure they’re not hurting one another!

I hope you found this information helpful. If you have any experience in keeping Pacman Frogs together, please consider leaving a common below.